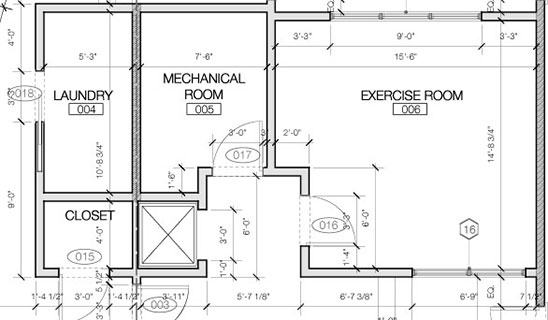 It's a bit daunting at first, but when you look at things one at a time you just see that these are "normal" systems - just a little bit on the futuristic side. Most electricians who build new homes find the nastiest piece of plywood that they can and affix the eletrical panel to it. We knew this would happen so we lined the entire room in wood before we started so that the various contractors could easily attach things to the walls.

To the left of the door is an Ethernet switch that is the heart of the house network. The cables from this switch go to a "patch panel" which is connected to the Ethernet jacks located throughout the house. Above this patch panel on the wall is a HAI OmniPro II home controller. At the moment, it is only used for Security and Thermostat controls. It can do a lot more - such as controlling lights, schedules etc, but to be honest it's a pain to program so we use the simpler Macintosh interfaces.

To the right of the Omnipro II is a custom panel made up of three relay boxes and an Ocelot computer. These four boxes control switching of Microphones and speakers, so that for example the main computer can switch it so that only the microphone by the - say - kitchen - is listening. This stops the computer from rocking out to music that it picks up in the music room and ignores you talking to it. This custom wiring harness is based on the original idea that came from James Lipsit's excellent home automation web site - www.james.lipsit.com. All of this VR VR (Voice Recognition, Voice Response) equipment was replaced by 8 Amazon Alexa devices in 2018 - but its still turned on because the blinking lights look good.

Underneath the Ethernet switch is a rack that holds the UPS (Uninterrupted Power Supply) - which is a fancy name for a battery that runs things if the power goes off - and eight seperate power amplifiers. The Power ampiifiers are currently all daisy chained together so that one music source is piped throughout the downstairs of the house. Curently, the music source is an Apple Airport Express so that you can select your music from upstairs in the house and pipe it through the whold house. Each amplifier can have a seperate input if you like so that the kids don't have to listen to "old people's" music. You can also use this system to broadcast announcements so that - for example - the computer can switch the music off and make announcements - which she does.

Moving to the right is the computer for controlling the sprinklers. This can be over-ridden by the main house computer but there's no need. The computer controls 22 sprinkler zones. Next on the right is the propane furnace. This is a state of the art furnace that is 98% efficient - it has it's own computer built in and tells you all sorts of things if you are interested. The plumbing high on the wall has individual shut off valves for every water line, these connect to the Pex tubing that runs throughout the house. Massachusetts was the last state in the nation to allow builders to use this tubing instead of copper - it had only just been approved when construction started. It is much better than copper because it can expand, it can go around corners without being cut and soldered etc.

On the last wall is the 400 amp panel and two of the five sub-panels for circuit breakers. It does look a bit like the eletricity stuff you saw in Jurassic Park. On the back wall is the distribution "stuff" for the Radiant Flooring and various eletrical stuff to control the valves.

Last, but by no means least, are the dimmer switches for the ground floor. These look like "normal" dimmers, except of course that they are computer controlled. If the computer ever failed, you can rely on the programming in the dimmers themelves to just carry on or you could turn things on and off by hand. Outside the mechanical room on the wall is the touchpad control for the HAI Omnipro II. The Omnipro is listening to the phone line, so if you ick up a phone and press * or # the computer will talk to you.