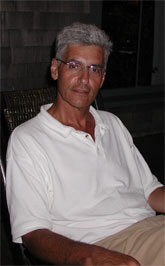 These are some of the special people who created this building. If anyone has been missed I apologize.

This is Hank Borba. It was Hank who said "You could do that" when we asked him if he could turn the Barn into a Home. It was also what he said when he decided to completely ignore silly ideas - well, if he thought them silly anyway.

Hank passed away before the Barn was finished, but he will always be a part of the history of the building. Hank was the construction manager I suppose is a good word.

He was also a great finish carpenter and spent every day of his life either making or fixing something.

In its hay day (pun intended), many of the locals would go get ice cream from across the road (where the milk was packaged) at the Bucket - which is now located at the park at the bottom of the hill.

They would then take their ice cream to the milking parlor and watch the cows being milked at the 4:00 pm milking. The cows were washed and milked twice a day.

Peter Rochford took over as project manager after Hank. Peter did a fabulous job and was capable of leaping into action when - for example - the backhoe operator said "I think I just hit a propane line"...

I have already mantioned Mark Pennel the architect. It was Mark's idea to make the downstairs a rabbit warren of rooms that you "discover" to contrast with the big space upstairs.

I can't say enough good things about Evelyn. www.evelynaudet.com who's lighting makes everyone who sees the Barn say wow.

Dan Lowney spent over two years working on the Barn and can probably tell you where every stainless steel nail is.

Steven Terrell for all of the work he did including the shingles.

Eric Isaksen for painting everything, for cleaning up after absolutely everyone and for always being there to do anything.

The framing crew of Custom-Tek led by Joe Luiz III. who made sure that this building will withstand at least another 100 years.

The solid insulation crew led who spent weeks in white jump suits and respirators sealing every hole in the building.

Steve Camara's sheetrock crew - who also did all of the rounded corners and plastered the entire building.

John's finish trim crew who really made the Barn with the simple trim flawlessley cut and put together - especially Paul.

Horner Millwork for the awesome staircase and railings and posts and the most ourageously expensive piece of curved wood that you have ever seen.

Tony Costa for the biggest fireplace you will ever see outside of a castle.

Dougie's Guacamolian (that's what Hank used to call anyone from south of the Rio-Grande) crew for the fabulous downstairs stone work. They sang while they worked and played "Horseshoes" every lunch time.

Feng's flooring crew of Vietnamese who installed the hardwood flooring - who listened to the lecture about nailing over raidiant flooring and managed to put a nail right through the tubing within the 1st minute that they started.

Mike LaMountain for the radiant heat that makes the heating system invisible.

And of course, Kevin and Chad from Souza Branco for installing the miles and miles of wire in the building.

The installation team from Natick Stone who did all of the fabulous tile work.

Kathy's kitchen design and simple elegant cabinets speaks for itself.

Shawn and Frank from Innovative Home Systems for the Audio-Video and security compnents and for the awe inspiring Microphone and Speaker switching.

Oscar for the American Clay - www.americanclay.com

Marcio and Tim for the painting.

Joanne for the bookeeping.

And last, but by no means least, Steve Sullivan for fixing the stair lighting and building (with Evelyn) the light valances.